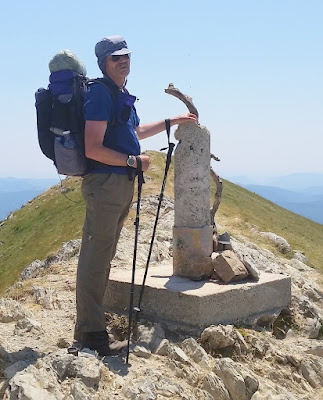 High in the Pyrenees... not very flattering of me, but a nice view of the Arc Blast in action, on the summit of the Pic d'Orhy. I lived out of it for 55 days.

So that was a total of  US$377.90, which at the exchange rate then ruling was £277. Quite a lot of money, but it is a premium product. Would I buy exactly the same again, if I were starting now? Yes I would indeed, though I might buy the 60l instead of the 52l pack. Same price, more space! Volume - getting everything in - was an issue for me throughout the walk, though I did manage OK. On the other hand, sometimes it is good to be pressed for space: inessentials will be left out! It was one factor in my decision to buy the 52l size.

My rucksack currently weighs 684g (1lb 8oz). The Zpacks website says 595g for the 52l pack, but don't forget in addition to that I have a belt pouch, two upper side pockets, load lifter straps, some extra shock cord, a lumbar pad, and a shoulder pouch. And some dirt, probably. Overall that's a similar weight to my Gossamer Gear Gorilla - but the current model Gorilla weighs 800g+, and that's without any of the add-ons.

I bought it in July 2014. It arrived in August, and in September I took it along the Pennine Way. It did well, so I took it along the Pyrenees in July and August 2015. So now it has had two good long distance walks; it has travelled about 1,000 miles altogether. How did it get on? 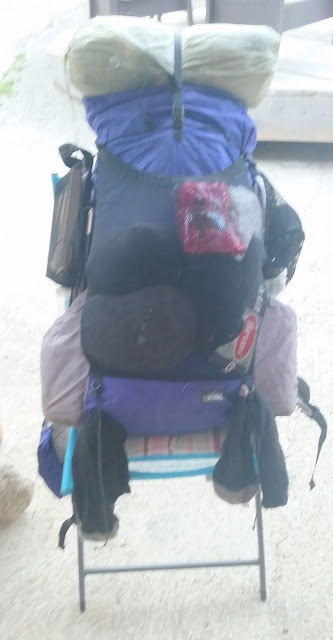 This is the Arc Blast sitting on a chair towards the end of the Pyrenees trek. It has the Zpacks tent strapped on top, various items stuffed in the main back pocket, a spare walking pole stuffed down one side, and a pair of socks drying in the ice-axe straps at the bottom..

I do try to treat my gear well and look after it, but the plain fact is, on a walk like this, through all sorts of terrain, it will get wear and tear and not a lot can be done about that. However after almost 1,000 miles of walking in very mixed country, the rucksack is still in excellent condition and still entirely usable. I reckon it could do the same again.

The main body of the rucksack is pretty much as new. The two bottom side pockets both have small holes, tears and other signs of wear. The mesh pockets have small tears too. 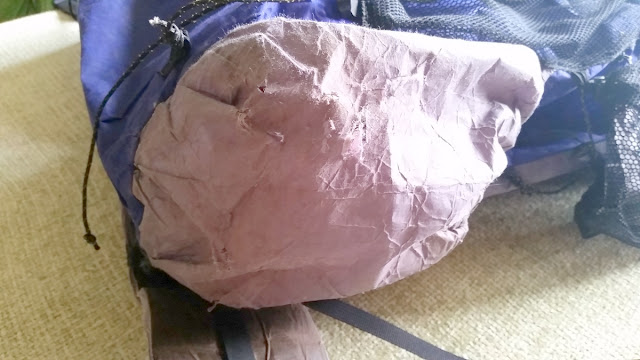 The underside of one of the bottom rucksack pockets

I do have a slight issue with this, as to me it seems entirely predictable that this will happen. The bottom of the rucksack is subject to a lot of stress and wear and tear. The rucksack itself is specified to cope with this, and indeed the base of mine still looks pristine. The main bag is very strong and abrasion resistant, it looks in mint condition. But the bottom pockets are not as strong, even though they are just as much in harm's way as the main bag, and always seem to suffer more. My previous bags, a Gossamer Gear Gorilla and a Miniposa, were exactly the same. The bottom of the bottom pockets really need to be made as strong as the rest of the bottom of the pack is...

Stop moaning. Was it OK otherwise? - Yes, I am extremely happy with the way it coped. It was filled absolutely to the limit, and then had more stuff strapped to the outside. I am sure I exceeded the recommended load weight at times. And if/when I go on another long walk, I will take it, it is still in perfectly good condition.

Was it waterproof? Very nearly. Not quite, but I reckon it could be. If it were a bit less full, so that you could turn over the top a couple of times as you are supposed to, I think it would then be fully waterproof. I usually had it so full that the top couldn't be turned over, and then I strapped the tent on top. I thought this would protect the top but I suspect that the rain ran down and round the tent cover, and then crept in the top. Even so, there was not much damp inside. I had a cuben liner bag, and nothing got inside that at all.
Bottom line is, I think all the seams were waterproof, and any water ingress was my own silly fault, not the fault of the pack.

Was it comfortable? It was for me, yes.  I can only compare it with my two previous Gossamer Gear backpacks, and it was better than them. I was able to arrange matters so that the hip belt rested on my hips and took pretty much all the weight. I used the shoulder straps to keep it balanced and in place. So long as your waist measurement is less than your hips, you should find the same. I do recommend the load lifter straps, they add little weight and give you another adjustment possibility that I found useful.

One of the features of the Arc Blast is the carbon fibre frame, which can be bent to create an air gap between you and the pack. I like the concept of this, and in general it worked well; it is much more effective than the foam or air pad idea Gossamer Gear use. I did have a couple of problems occasionally with the frame ends coming out of their sockets, and with the cord adjusters slackening off without my noticing. I think though that this may also be connected with the overloading issue - it is certainly much easier to adjust and tension the frame when the pack is unloaded or lightly loaded.

So, no problems at all, then? Yes, I did have three incidents, as follows. I relate them below as this is a comprehensive review. But I don't think any of them reflect on the quality of the design or manufacture:

- on my first day on the Pennine Way, the plastic clip on the top strap, that fits into the socket to secure the strap, broke. Looking back, I think this was actually user error. Make certain when you close the clip, which is quite small, that all three if the little prongs are going to go inside the socket. If two of them are and one is not, the third may snap off... When I mentioned what had happened to Zpacks, even before they replied to my email, they had put two more clips in the (transatlantic) post to me. Quality service. I was lucky to break a clip that could be threaded on, and was not sewn in place as most are. But I haven't broken any since!

- about half way along the Pyrenees, one of the shoulder straps broke. Below the padding parts, there is an adjustment strap and the top part of that is a loop sewn from the padding part that secures the plastic clip in place. This had frayed through. Now, as I said above I do not use the shoulder straps as heavy load bearing items, the weight is kept on the hip belt, so I am totally mystified as to how that could have happened. The corresponding loop on the other strap is pristine, so I really don't know. I did fall over twice while wearing the pack, maybe it was stressed and torn when that happened. No idea. I had to sit down with my little sewing kit and sew the loop back in place, there and then. The result is not pretty, but it has held OK since.

- the upper side pockets, the belt bag and the shoulder bag were all really useful additions. However the upper side pockets were held in place by little thin bits of elastic cord sort of twisted in place, and they kept coming undone. This was more an irritation than anything else - I never actually lost one, they hung on, or fell into the lower pockets - but when I next use the pack I will sit down beforehand and make certain they are all properly secured.

In summary? Definitely the best rucksack I've ever had. It is a Mercedes, or possibly a Bentley, among backpacks.

Zpacks is a decent sized company nowadays, or so I believe, but it doesn't feel like one. It seems more like an old-fashioned tailor, who listens to what you want, takes measurements, and then makes something by hand that fits you perfectly. Joe Valesko gave me lots of good advice about what to buy and in what particular size. I think Zpacks are excellent value, for what you get.

JerryW
I like walking, drinking good wine, my village community, cooking, and reading Samuel Pepys and other non-fiction. Not necessarily in that order..